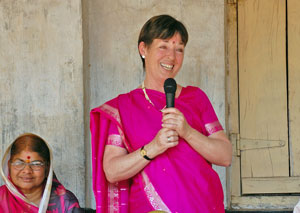 The author, Carol Vlassoff, is Adjunct Professor, Department of Epidemiology and Community Medicine, University of Ottawa, Canada. She worked for 17 years with the World Health Organization (WHO) and spearheaded WHO’s first initiative on gender issues, a task force on gender and tropical diseases. She was head of the Population and Development Research Program in the International Development Research Centre (IDRC), Canada, previous to joining WHO. She was also Senior Population and Reproductive Health Specialistwith the Canadian International Development Agency (CIDA) for three years.

Gender, development and reproductive health have always been central components of her work and publications. Dr. Vlassoff obtained a PhD in Economics from the Gokhale Institute of Politics and Economics, University of Pune, India, specializing in population studies. The topic for her thesis concerned cultural traditions and their influence on family planning and fertility among rural Indian women, a topic which she continued to pursue over more than three decades. She has authored more than 65 peer reviewed scientific publications, of which 21 focus on some dimension of her Indian research. This book is the first to tie together all the material into a unique analysis based on three study periods. Dr. Vlassoff is a Canadian citizen and currently divides her time between Costa Rica and Canada.