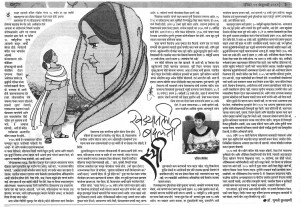 Carol Vlassof from Canada has been coming and staying in a small village in Maharashtra every ten years during the last 35 years. During her stay she has been following the changes taking place in the life of women in that village. Recently she came to present the findings of her research to the researchers in India and in the gramsabha of that village. During her visit, we were going down the memory lane. I still remember Carol as she was 35 years back. She had come to work for Ph. D. under the guidance of Prof. Kumudini Dandekar of Gokhle Institute Pune, under Shastri fellowship programme of the Indo-Canadian Institute of Canada. I still remember Carol, staying in the Gove village (with a population of about 2000, near Satara), wearing traditional irkal saree and speaking Marathi with rustic accent. She used to tell us how she goes to the river for washing clothes along with other women- –so this was our Carol at that time.

Carol in a nostalgic mood about those days. was telling me ,”On one rainy day in 1975, we    -me and Michael,   reached this village wading through the water, Michael somehow pushing the scooter across the river, The first day itself, village sarpanch, Vitthal guruji, and one very respected senior person from the village, Jijaba Anna Jadhav gave us such a warm welcome that we decided to choose this village for our study”.

When I asked her how difficult it was to come from a developed, rich country like Canada and stay in a backward village in India, Carol said, ‘All the people, we met were very nice, but rodents were a big nuisance. Before we got accommodation in Gadgil house (wada), we used to sleep on the floor in the Gram Panchayat office. There, it was difficult to get sleep due to mosquitoes, rats and fleas. Later on, when I was interviewing a woman for our survey, a mouse emerged from under her blouse. Village women always used to remove lice eggs from each other’s hair. Once, one woman suddenly screamed ‘See, even Carol tai has lice in her hair’, and then—on their advice, I tried kerosene oil and it took many, many washings to remove that smell.

It was obviously an ordeal to adjust to many such odds, especially for a young girl from developed country but Carol not only did this penance but kept on coming to the village every ten years even after completing her Ph. D. and even after holding high positions in WHO and other international organisations.

Right from the beginning she had mingled very well with the village life. She used to participate in wedding ceremonies, naming ceremonies and the festival of the local deity –God Koteshvar. Once the shepherd community of the village invited them for their festival. Its worth listening the experience in her own words ” one man covered in red, pink yellow powder from head to foot was wildly dancing. He came to us and asked ‘do you have a question for Lord Khandoba?’ We said, ‘yes, we want to ask whether we will get Ph. D. ‘ He  chanted and danced wildly for some more time, then came over to us and said ‘you will be blessed with Ph. D. but you will have to give feast to the whole village’ and indeed we gave feast to the village after getting Ph. D”.

Carol says that during the last 30-35 years certainly some good changes have taken place in the village, but some other types of changes need to take place for women’s advancement. Since the construction of dam is completed, farmers are going for cash crops, incomes are rising, and more and more children are going for education, now often farm labour is brought from other villages. In many houses one can now find colour TV, motorcycle in place of earlier radio and bicycles. Village population has grown one and half times.

As regards women one good change is that now girls are going for education. In 1975, hardly half the women in the age group 15 -26 were literate, whereas today 91% are literate. Proportion of girls going beyond 8th class has increased three times. Average age at marriage was below 15 in 1975. Today it has reached 18.In 1975, the only college going girl in the village was Jijaba Anna’s daughter, studying at Pune. Now many girls go to college in nearby Satara city.

Carol says, ‘the most notable change is that women now get more spare time because they don’t have to go walking long distance for fetching water because it is available now in the village itself. Secondly, most women don’t have more than two children.  Families are mostly small. Thirty years back, hardly 13% women had more than two hours as leisure time, now this percentage of such women is more than 60.

Carol, however, is rather unhappy about one change. Most of the women spend this spare time in watching TV. Earlier at least, while going to fetch water they used to share their happiness and sorrows with each other. Now this type of dialogue is almost lost. Old Gadgil house (wada) is demolished and a new two storeyed cement house is built there. Earlier visitors used to sit in the front long porch (Osree) and used to chat with each other on a variety of topics but now they straightway go inside and join the family in watching TV and sit in front of TV for hours. Secondly though now girls are educated, not many employment opportunities are available. Thirty years back, among young working women in the age group 15 -26, nearly 33 % worked as labourers for others but now this proportion is half of that. Hardly one or two women are going for jobs. In those days percentage of women engaged in household work or working only on their own farms was 66%, now it is almost 80%.Perhaps, now they are better off and hence don’t want to go to other people’s house for work Village has not experienced the kind of empowerment, which results from increasing availability of employment opportunities to educated women Self help groups are there but even for their success there is need for more income earning opportunities for women.

There is, however, some improvement in the attitude towards women. Proportion of those who feel that women should always take meals after me had it, is considerably reduced. Nearly 63% men said that wife should go and buy a saree of her choice but 30 years back not even 16% felt so. One should feel happy that 96% men are against taking dowry but unfortunately, those who think that there is nothing wrong in taking jewellery and other costly items in place of dowry are also 96%. Carol strongly feels that for bringing about improvement in women’s status, first it is very essential to bring about change in men’s attitude.

Child mortality is considerably reduced. Thirty years back majority of women desired that they should have 3-4 children of which two should be boys. Now majority does not want more than two children. In 1975, among women aged 15-26 having one or two sons, hardly 2% underwent sterilisation, now 76% of such women opt for it.  Though proportion of those who adopt family planning has increased considerably, the major thrust is on female sterilisation. Yet it is true that as compared to earlier times, proportion of those using other methods of contraception has increased somewhat. Women going for IUD insertion were hardly 4 percent, now they are 11%. Women using oral pills were only 2% in 1975, now they are 16%. Carol, however, is worried about increasing abortions. According to one local doctor, most of these abortions are of women who don’t want a girl child, Carol emphasizes that since majority of couples in the village are convinced of the need for family planning, now there is need to give high priority to the improvement in women’s health. In her 2005 survey, she had asked questions regarding sexually transmitted diseases and HIV AIDS. She wonders how to create a suitable atmosphere in the village to have a frank discussion on these issues. She feels that women won’t be empowered in the true sense of the term unless employment and income earning opportunities are made available to them. For this, it is essential to make them employable by giving practical and occupational training. She thinks it necessary to make efforts to see to it that in the marriage market they get status equal to that of boys.

Carol didn’t stop at completing three surveys in the village but out of gratitude for the village which gave so much love and affection to her, she, during her stay in 1987, instituted, a scholarship for the college education of girls. The amount provided by her for this covers the tuition fee as well as the expenses for commuting to Satara, books and participation in sports and picnics. Village people argued that parents won’t be ready to send girls to college. Still Carol insisted that the scholarship would be only for girls and many girls from the village did avail of it. Carol is very proud to point out that the scholarship funded the first Neo-Buddhist girl (SC) to attend college.

In the surveys conducted by her in 1985 and 2007, she involved many young girls and boys from the village to help her. She used to stay in the school premises along with 2-3 such girls and used to cook and take meals along with them.

In 2007, when Carol stayed in the village for about three months, she made arrangements for teaching Yoga and Aerobics to girls in the village. She provided funds to cover the salary of a visiting teacher coming twice a week, 25 floor coverings (sataranjees), a CD player and Aerobics Video CDs but this experiment was not so successful. When she visited again in 2010 she found out that the visiting teacher was not appointed at all. Girls from the village enthusiastically gave some demonstrations for her but the P.T. teacher from the village could not find the Aerobics CDs. ‘Perhaps, now it is a part of school curriculum and the separate class for this is not necessary’ Carol tries to understand and keeps on talking about what more should be done to improve the condition of women and girls in the village.

Village has changed, earlier people are no more there but coming from a distance of thousands of miles, having learnt the language that was totally new to her and living in difficult conditions of the village with great tenacity, the bond that Carol created with the ordinary women of this village is still very strong.